Learn how to use VBA to change all instances of one shape to another without having to manually select anything, thanks to this code from Steve Rindsberg. 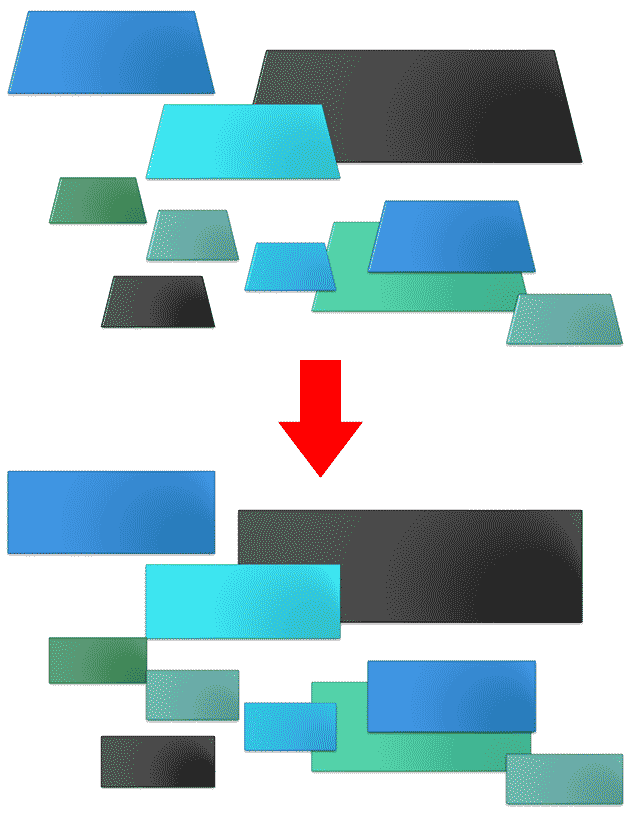 First you need to know how you can run VBA scripts in PowerPoint — then use this code. Explore the code a bit though since Steve has put in some helpful comments so that you can edit some values as required.

This code worked for Manon, but it ignored all the trapezoids that were part of groups in PowerPoint. So Manon found some code on Steve’s own site and modified it so as to work for shapes within groups!

And now Manon could even change shapes within groups! Manon adds, “All I did was adapt the code that Steve gave me, in the way shown on his page. It took some puzzle-solving, but the puzzle pieces are all Steve’s. I think this is pretty simple code for Steve actually.”

Steve does mention on his site, “This code won’t look at groups within groups.”

Once you have placed this code in the VBA editor, close the window to get back to your PowerPoint window. Before you proceed further, it’s a great idea to save your file — be sure to save as a PowerPoint Macro-Enabled Presentation with the PPTM file extension. If you save as any of the other file formats, PowerPoint will offer to remove the macros, and then, of course, the code to change one shape to another will not work! See our PowerPoint File Formats page to learn about these file formats.

Then open or switch to the presentation with the shapes you want to change and run the macro. To do that, press the Alt F8 shortcut key. In the Macro dialog box that appears, next to Macro in: choose All open presentations, as shown in the figure below. Click the ChangeOneShapeToAnother Macro name, and then click the Run button. 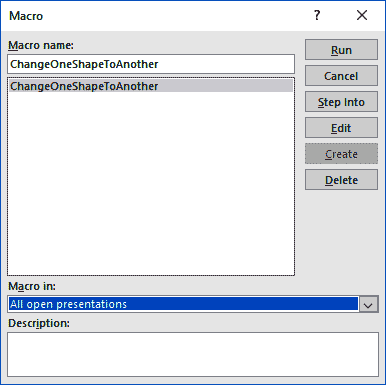 The code looks any trapezoid shapes in your slides and changes them all to rectangles. You can substitute the trapezoid and rectangle shapes to any shapes of your choice. Of course, you will need to know the VBA names of these shapes. Here are some common shape names:

You can find VBA names of many other shapes on this MSDN page.

We tested this code using PowerPoint 2013 for Windows.

Steve Rindsberg has been associated with PowerPoint since the product originated more than two decades ago — his PowerPoint FAQ site is a treasure trove of PowerPoint information.

Manon Mikkers Minning is a PowerPoint specialist based in the Netherlands. She is associated with Betere Presentaties, a Dutch presentation design agency. Manon also helped with our challenge at Indezine to create the perfect Circle Illusion Animation in PowerPoint.

2 responses to “VBA: Change One Shape to Another in PowerPoint”