This code no longer works in PowerPoint, and is retained for archival reasons. 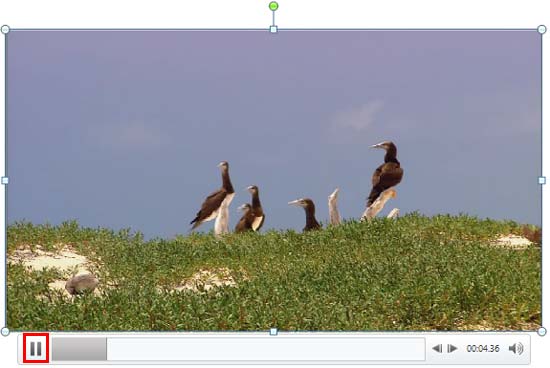 PowerPoint 2010 changed everything! Rather than linking videos, the default option was now to embed the videos as part of your PowerPoint file. And that’s how it has been for subsequent releases of PowerPoint, including versions 2011 and 2016 on Mac, and versions 2013 and 2016 on Windows.

Undeniably, this had its share of advantages: there are no more missing videos, and you no longer need to create a folder to manage all your media files. Yes, that’s less housekeeping for you to do, but housekeeping does have its own share of benefits. For one, you don’t end up with huge monster files!

Ideally, you can just delete all the video files and then insert them again. This time, you can opt to link files rather than embedding them. To do that, click the down arrow next to the Insert button, and you’ll find an option to link rather than embed. Yes, we know that’s not too obvious!

But what if you did not want to re-insert videos all over again? Then just copy all the videos to the same folder as your PowerPoint file, and then run this EmbeddedMoviesToLinkedMovies VBA snippet, graciously coded by Steve Rindsberg of PowerPoint FAQ. Thanks to Steve for allowing us to reproduce this code here. Steve adds that it’s best that you do this only with a copy of your original file.

First you need to know how you can run VBA scripts in PowerPoint. Then use this code. Explore the code a bit though since Steve has put in some helpful comments so that you can edit some values as required. Most importantly, be sure to edit the path as directed in the comments, else this code won’t work.

Once you have placed this code in the VBA editor, close the window to get back to your PowerPoint window. Before you proceed further, it’s a great idea to save your file — be sure to save as a PowerPoint Macro-Enabled Presentation with the PPTM file extension. If you save as any of the other file formats, PowerPoint will offer to remove the macros, and then, of course, the code to change embedded videos to linked will not work! See our PowerPoint File Formats page to learn about these file formats.

Then open or switch to the presentation with the embedded videos and run the macro. To do that, press the Alt F8 shortcut key. In the Macro dialog box that appears, next to Macro in: choose All open presentations, as shown in the figure below. Click the EmbeddedMoviesToLinkedMovies Macro name, and then click the Run button.

Thank you so much, Steve.

Steve Rindsberg has been associated with PowerPoint since the product originated more than two decades ago. His PowerPoint FAQ site is a treasure trove of PowerPoint information.

One response to “VBA Code: Change Embedded Videos to Linked?”